The Arms and the Crest 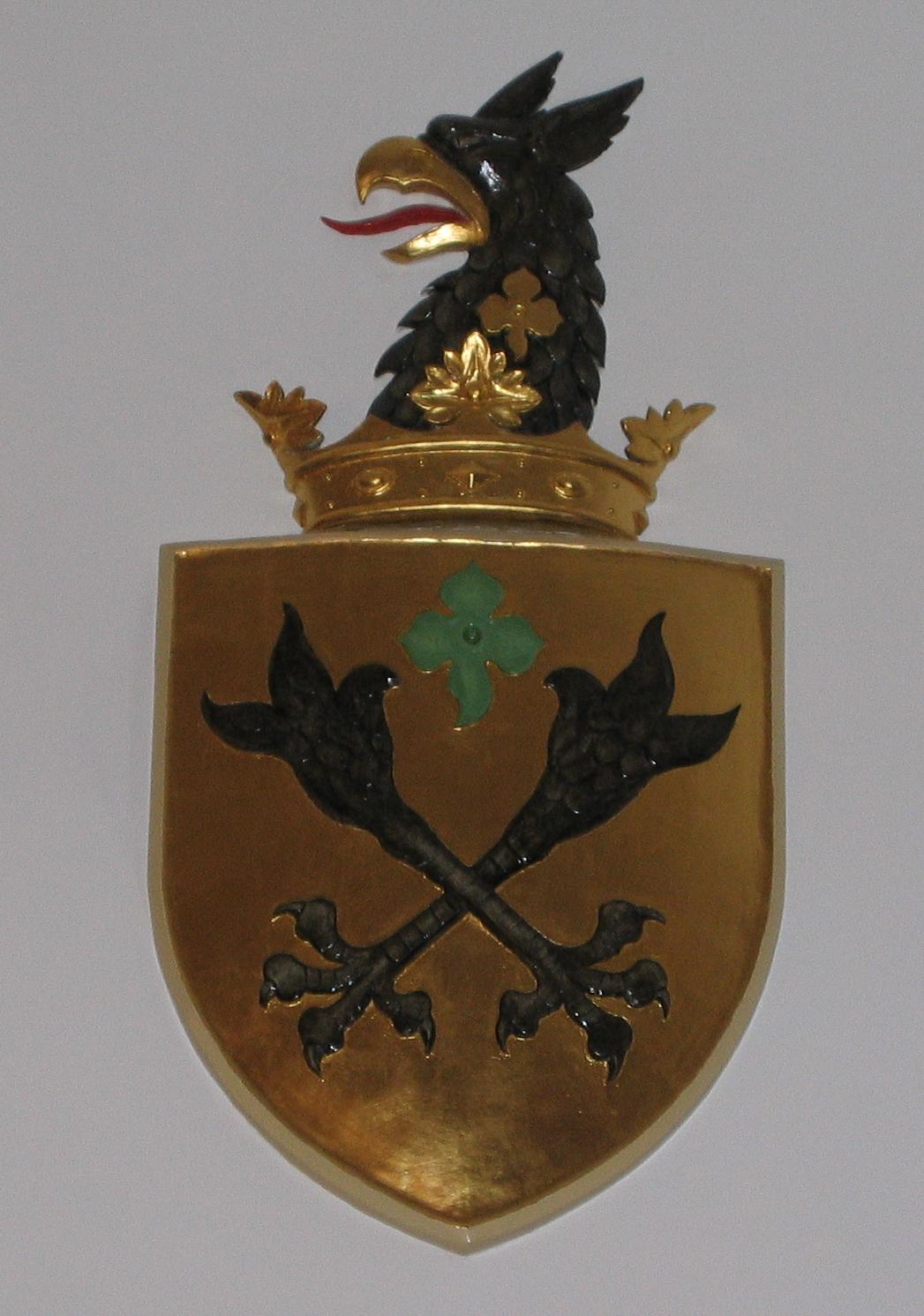 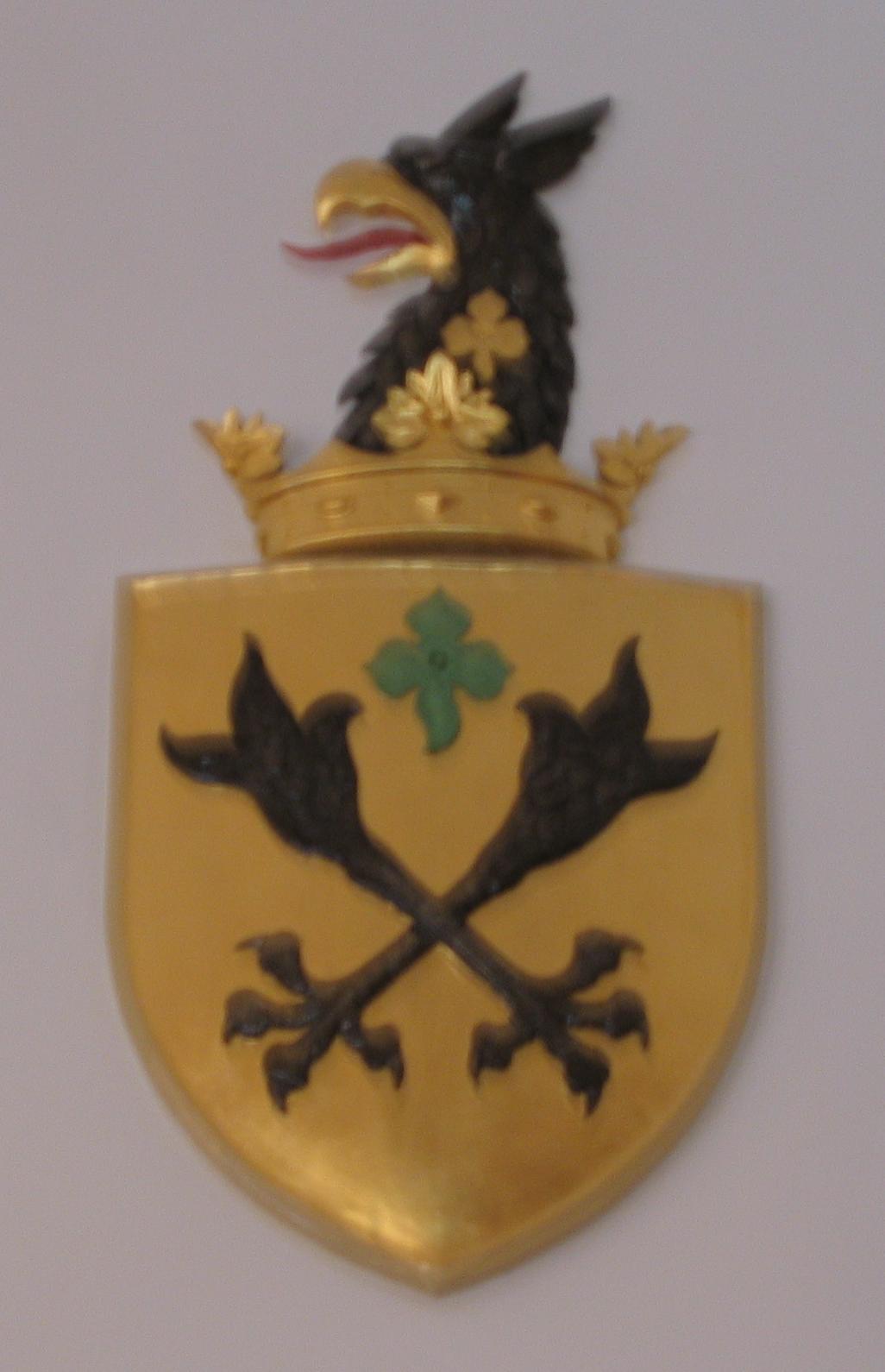 The arms were first awarded to Thomas S Hixon, the Keeper of the King's Wardrobe, then to James Hickson, a Liveryman of the Worshipful Company of Brewers, then to Robert Hickson who was a High Sheriff of Co Kerry.

The Hickson arms were originally confirmed by Camden, in 1617, to Thomas Hixon, of Greenwich, keeper of the King's Wardrobe, who descended out of Cambridgeshire, and now duly registered in the Office of Arms, Dublin Castle.

Coat of Arms of the Irish Hicksons

Thomas Hixon's Arms did not include the trefoil nor the motto.

The Epitaph of James Hickson. citizen & brewer of London. On the S. side of the Church, a spacious white Marble Monument adorned with Columns and Entablature of the Corinthian Order, and an open Pediment whereon lye 2 hyrids, this Inscription; "Near this Place lyeth the Body of James Hickson Esq; who died 16 of June, in the Year of our Lord 1689. of his Age 82. Who in his Life time built an Almshouse for six poor People in the Parish of S.Mimms, in the County of Middlesex, and at his death Endowed the said Almshouse with a Salary of 24 l. per Ann. with some other advantages. "He also Founded a School in Plough-yard in this Parish, for the Educating 20 poor Children; to the head Master of which he appointed 20 l. per Ann. his dwelling House and two Chaldron of Tea Coal, and to a Writing Master 8 l. per Ann. [this is a brief extract of my notes]. No record of any Arms being awarded to James Hickson has been found at the College of Arms.

Various drawings that I have seen:

The Crest (the upper part) should be sitting on a wreath of white and red and the Arms (the lower part) underneath this.
These are missing from these drawings. 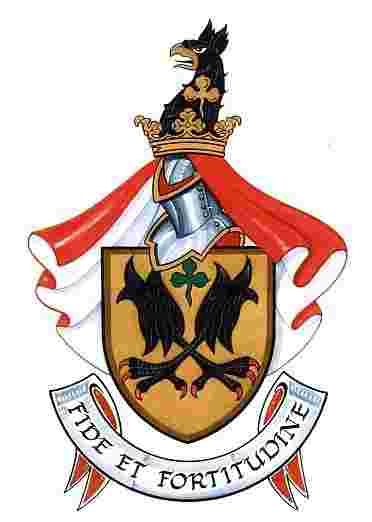 The background of the Arms should be 'Or' (yellow or gold), the beak on the crest should be gold ('sable beaked Or') and the 'dexter surmounted of the sinister' means that the leg with the foot on the right (dexter) should be on top of the other leg (sinister, left) as shown in the coloured photographs at the top of the page.

There were two people who were awarded the Hickson Coat of Arms. They both came from the same area.

James Hickson (1607-1689) was born in or near Melton Mowbray. He was a Citizen and Brewer of London who, in his lifetime, built an Almshouse for six poor people in the parish of South Mimms which was then in the County of Middlesex. In memory of him a spacious white marble monument was erected adorned with columns and entablature of the Corinthian Order. Still in existance in 1880 it was heavily bombed in the first world war and there is now no trace of the inscription and memorial. No proof has been found that he was entitled to bear these or, indeed, any Arms although they have been attributed to him at Brewers Hall, see the two photographs at the top of the page.

Both the two Roberts were descendants of the Rev. Christopher Hickson (before 1553-1638) who moved from the County of Cambridge to County Kerry in December 1553.

Robert Conway Hickson was the son of James Robert Hickson and Teresa Maria Pearl and the grandson of Robert Christopher Hickson and his cousin, Mary Hickson.

There are many living descendants of Rev. Christopher Hickson all over the world, but no-one has been able to discover who were his parents. Little is known about the relatives of James Hickson who is thought to have married at least twice. His Will mentions the children of his last wife by a previous marriage and her brother. Thomas Hixon married Margaret Manley and they had (at least) eight children, however none of their descendants have been found.

Further research has found that:

The arms shown above are those granted in Ireland in 1856 to Robert Conway Hickson, since the shield and crest both bear a trefoil. Before this grant was made, Robert Conway Hickson must have convinced Ulster King of Arms that he was descended from the Hixon family of Cambridgeshire, but the text of this grant makes no reference to Thomas Hixon. The arms displayed in Brewers' Hall for James Hickson are the same as those recorded for the Irish Hicksons. However since he lived before Robert Hickson this does not make sense. During the war the Livery Hall of the Worshipful Company of Brewers was destroyed, together with the Arms. When it was rebuilt the Company wished to restore the Arms but having no records they copied the only Hickson Arms that they could find. Unfortunately these were the Arms of the Irish Hicksons which had not been awarded at the time of James' death. If he was entitled to any Arms it could not have been the Arms with the trefoil, however, his entitlement to any Arms still needs to be proved.

James Hickson is not on record as entitled to any arms; it is possible, of course, that he was connected with Thomas Hixon, or claimed descent from the Hixon family of Cambridgeshire, but proof would be needed from genealogical research outside the College of Arms in the national and local archives.

[an error occurred while processing this directive]

References include: The College of Arms, London. and Free-Born John - the biography of John Lilburne by Pauline Gregg. Chapter 1 is devoted entirely to The Hixons of Greenwich.